I hope that you are all enjoying Kitty’s Storecupboard Gin Week as much as I am! This post has been written by ‘Australian Sarah’ (not ‘Winemaker Sarah’ or ‘my sister Sarah’) who was given the very difficult task of visiting one of the Edinburgh Distillery’s near where she lives, so that we can all better appreciate  the hard work that goes into making the smaller scale ‘craft’ gins which we  enjoy so much. Read this post with an Friday evening G&T in hand, and as Sarah concludes her piece ‘never forget how much love and care has been put into your handcrafted gin’.

As an oompa loompa of science I find the world of distilling and brewing quite fascinating.  Basically Chemistry class for adults!  So to celebrate Gin Week and a couple of visitors from home I headed to Edinburgh’s first gin distillery in 150 years: Pickering’s, situated in Summerhall in Edinburgh’s south.  I had unfortunately missed out on Juniper Fest over the weekend and had already visited the Edinburgh Gin Distillery, so was keen to learn what made Pickering’s special.

Pickerings gin is based on an original Bombay recipe dating back to 1947 and kept as a family secret until it resurfaced in 2013 when Matt and Marcus began distilling at Summerhall.  The tour begins at the Royal Dick Bar in Summerhall, also home to one of Edinburgh’s breweries Barney’s Beer, with a G&T to sip throughout. 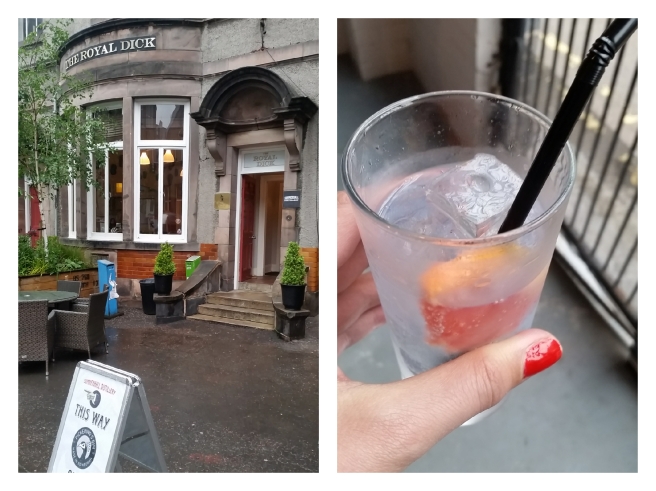 From the bar you are taken past the Mens room, then the Ladies, through winding corridors and over uneven ground to what used to be dog and cat kennels.  They have since been repurposed with some of the kennels used to store raw ingredients, gin and boxes.  But how do they make their gin?

A neutral grain spirit with 96%abv is piped into one of two copper stills on site, one called Emily, the other Getrude after Matt and Marcus’s great-grandmothers.  In the still the 9 botanicals are added and the spirit left to steep. 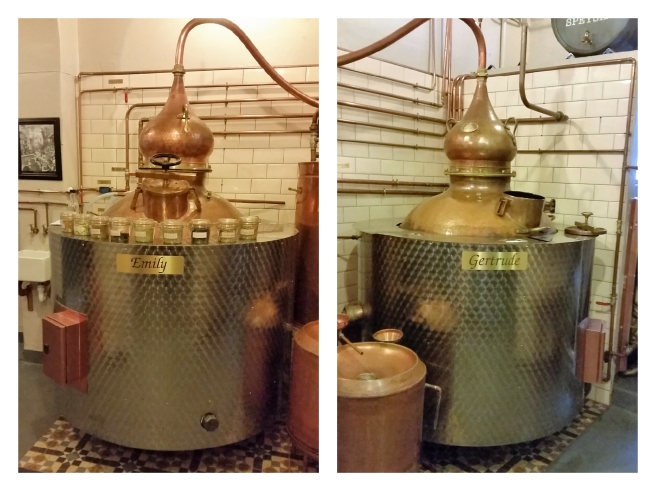 The 9 botanicals that go in to making this tasty drop are juniper, coriander, cardamon, angelica, fennel, anise, lemon, lime and clove.  The two stills have an ingenious custom-designed bain marie heating system that provides a gentle simmer able to coax out their subtle, soft, highly drinkable flavours. 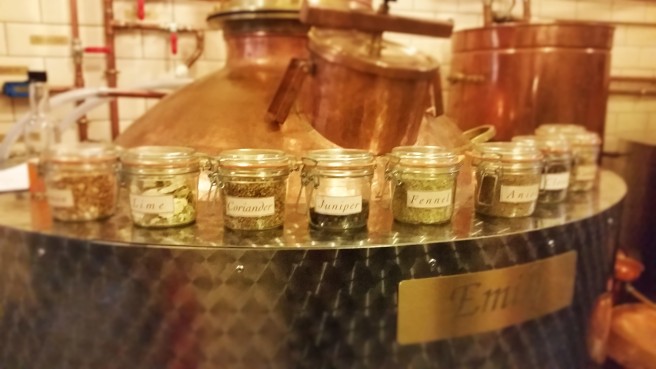 After steeping, this bain marie system is used to heat the spirit to vapour.  As the heating begins this vapour is trapped in the ‘onion’ of the still, condenses and travels back down to the heart of either Emily or Gertrude.  This process of vapourising, condensing and travelling back to the spirit can occur up to 16 times before the spirit is warm enough for the vapour to bypass the onion and travel through the swan neck to the neighbouring condenser.

The condenser uses water that is stored in a local underground well to cool the vapour back to a liquid.  Similar to whisky distilling, the potable alcohol the distiller wants to capture has a boiling point of 78.2oC, with the first vapours to boil off being more volatile and known as the ‘heads’.  The heads include chemicals such as acetaldehyde (CH3CHO), acetone ((CH3)2CO) and esters (pretty sure I learnt about those in chemistry back in the day!).  Once the desired boiling point is reached the ethanol liquid is called the heart and piped through copper piping to one of three vats.  The heart will be ethanol.  The tails are left, containing water, carbohydrates and less volatile alcohols, all undesirable.  The tails will consist of 1-propanol (CH3CH2CH2OH), butyl alcohol (C4H10O), amyl (Isobutyl carbinol) and acetic acid (CH3COOH) to name a few.

The copper in the still and piping is very important as it helps produce an even, smooth flavour and impurities are left on the inside of the copper piping thereby keeping the spirit pure without excessive filtration.

Once stored in the vats the distillers will monitor the temperature and density of the spirit, regularly taking temperature and density readings and adding water until the desired alcohol content is arrived at.  Pickering’s Gin has 42%abv, slightly more than the required 37.5%abv to qualify as a London Dry Gin.  It is a particularly high tech process at Pickering’s, adding the water by hand in smaller and smaller quantities, stirring using a oar bought from an outdoor shop and taking individual measurements with thermometer and hydrometer then double checking them in a large book full of tables. 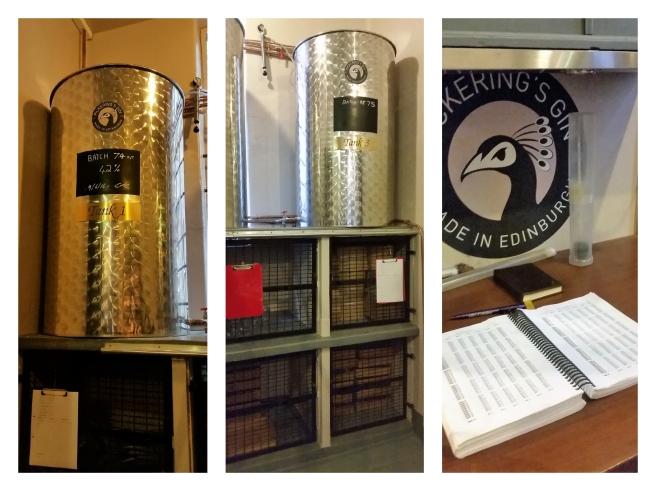 This is a one-shot method, only mixing their end distillate with water to cut it to bottling strength, compared with larger distilleries who use more base spirit to stretch their distillate before cutting with water.

When the desired alcohol content is achieved then it is piped in copper pipes to the room next door where it is bottled by hand.  It is also stoppered and waxed by hand.

If you’ve ever seen a bottle of Pickering’s you’ll know the bottle isn’t square, which makes attaching labels by hand consistently rather difficult.  The distillery is housed in part of Summerhall, an old Veterinary Hospital that is now home to many community groups including Edinburgh Hacklab.  This hacklab is a space for people to mess around with technology for fun so Pickering’s asked them to come up with something they could use to attach the labels, as they were worryingly close to their launch date and had a few hundred bottles to label.

The resulting machine is quite something, and is still going well considering it was designed to be used on a few hundred bottles and has now been used on over 60,000.

Once labels are attached, and the stoppers are waxed the bottles are boxed up and stored in the old dog kennels.  Throughout this whole process it s evident that everything is done by hand by a very small team, and it is definitely a labour of love. 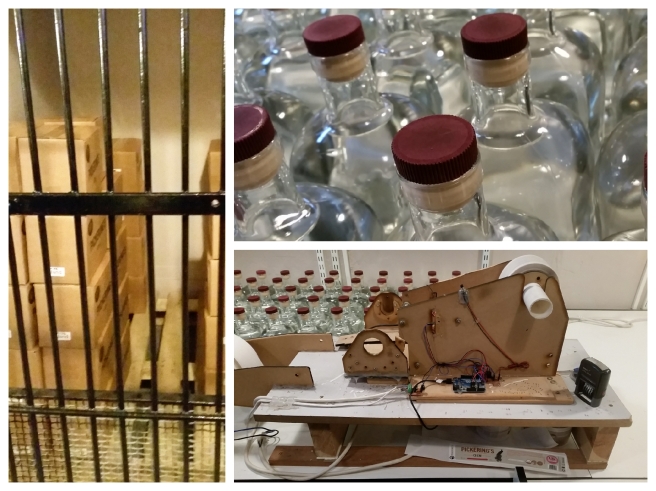 The original 1947 recipe was altered as they were creating a gin that goes perfectly with tonic, and it seems they have hit the nail on the head.  They also produce a Navy Strength gin, as official partners of the Edinburgh Military Tattoo, and have also created a gin using the original 1947 recipe which is a spicier, sweeter and more intense spirit.

Their most recent release has its beginnings in a trip around Scotland to the iconic whisky regions in search of the best casks they could find.  They then age their Original gin in one of five ex-Scotch malt whisky casks, and the result is truly something! 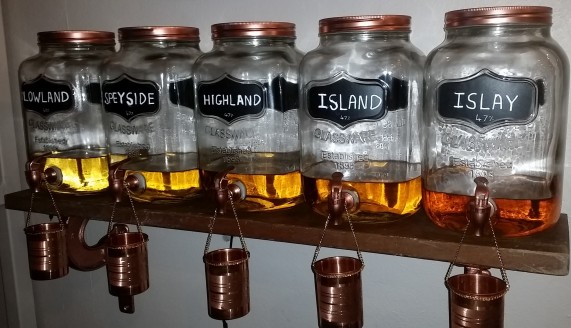 Well that’s all from me today.  I hope you feel a little better informed about the process of creating one of my favourite gins.  I definitely believe a greater understanding of something leads to a much deeper appreciation of its beauty. So next time you sip that G&T ask yourself what botanicals are in it, how they affect the gin, whether it is a one or two shot distillate, and never forget how much love and care has been put into your handcrafted gin. 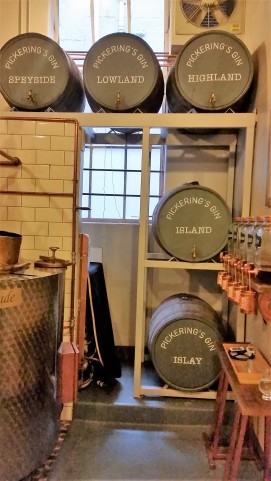 … and that’s nearly the end of Gin Week guys and gals. Not quite though, because Winemaker Sarah and I are going on an unexpected little adventure tomorrow afternoon which we will share with you tomorrow – watch this space!

5 thoughts on “A little lesson in distilling and gin appreciation…” 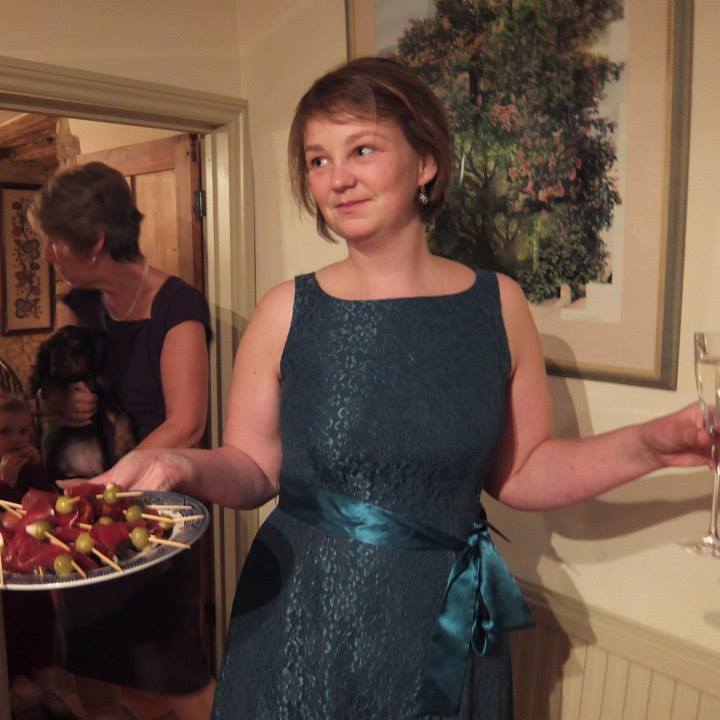