Autumn is drawing in, and as far as I am concerned that equals soup weather (and pie weather of course!). This one I find particularly warming, I think partly due to the mace which I very much associate with autumn and winter cooking. Mace is a truly wonderful spice; if you do not have any in your store-cupboard I highly recommend that you get some. Mace comes from the same tree as nutmeg but has a rather more savoury taste, it is fantastic in all sorts of wintry stews and I recently put it in a rather delicious beef pie.

This mushroom soup recipe is vegan;  I put soy milk in it rather than cows milk because I had some in the fridge which needed using. I have to say that I don’t like soy milk in tea or on cereal but it is really good to cook with. I am also rather fond of almond milk – it’s great to cook with and rather good in hot chocolate.

Heat some oil in a frying pan and then add the onion, mustard seeds, mace and pepper.

When the onion is nicely softened, add the mushrooms. Give it all a stir, turn the heat down and put a lid on the pan allowing the mushrooms to ‘sweat’.

Keep an eye on it;  you probably won’t need to add any liquid because a lot will come out of the mushrooms,  but if it looks like it is drying out then add a splash of hot water from the kettle.

When the mushrooms are cooked, put them in the blender along with the cornflour. Give it a good whizz, adding the soy milk (or other milk) a bit at a time.

Put the mixture back in the pan and heat slowly, allowing the cornflour to thicken.

Taste, and add further seasoning if required. More milk can be added, depending on how thin or otherwise you like your soup. 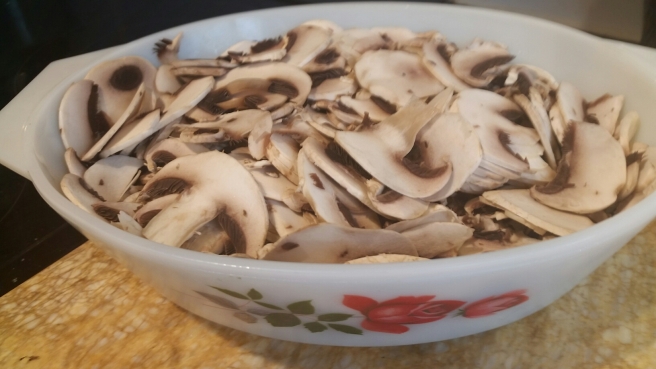 I have decided that it is time to go back to my £5 a week food budget – I have become lazy recently, and although I have maintained the discipline of not wasting food it has become too easy to spend more than I need to and to do ‘lazy cooking’.

I have not yet spent my £5 this week, and I did not top up my storecupboard before commencing my budget cooking – no cheating! Before I spend my £5 I need to use up some fresh ingredients; my lovely lodger is working away for a week and has left me with a fridge full of yummy things which I cannot let go to waste, so what I have to start with is:
– a couple of rashers of bacon
– a bag of green salad
– an avacado
– salami & parma ham
– red peppers

I also have carrots which very much need using up, onions, garlic, a lonely potato, a lonely tomato, fresh bread, and of course my trusty spice cupboard. 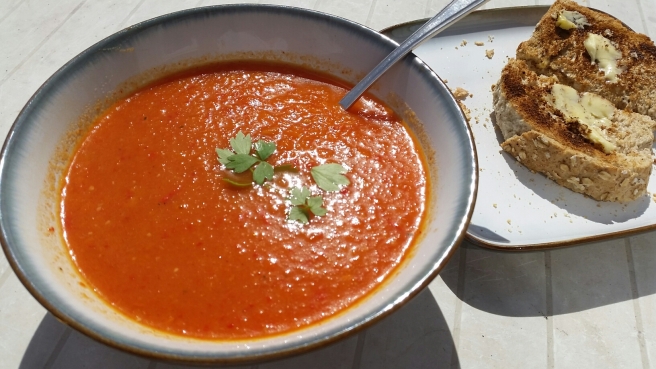 So of course I started with soup.

Method
Finely chop all of the vegetables apart from the tomato. Fry in a large saucepan with the paprika and a little oil or butter.
Put the tomato in a bowl of boiling water straight from the kettle; when it has been in there a few minutes you will find that the skin peels off easily.
Add the tomato to the other vegetables along with a pint of stock – I used my turkey stock from the freezer, but you could equally use a vegetable stock cube.
Simmer until the vegetables feel soft when you put a fork in them – about 20 minutes – then blend using a food processor or hand blender.
Return the blended vegetables to the saucepan and continue to cook on a low heat, adding more liquid (water or milk) if you think that the consistency is too thick.
Taste, and season with salt and pepper if required.
Serve with toast and lots of butter.

… and I have plenty left for lunch tomorrow – hurrah!

It is over two weeks since I posted this taunting photograph with the Leftovers Soup, and I have finally got around to writing the promised (and much requested) recipe. Apologies for being a bit slack.
Ingredients

If you do not have plain yogurt, milk can be used instead but make sure that you start with a much smaller volume and work up to the correct texture.

Sift the flours with the salt and bicarbonate of soda and then rub in the butter.

Add 225 ml / 7½ fl oz of the yoghurt all at once and mix quickly to make a soft dough, adding the additional yogurt only if necessary.

Shape into a 15 cm (6 inch) diameter ‘cake’ and place it onto a floured baking tray. Score deeply with the back of a knife into quarters.

Brush with beaten egg, then grind some salt and pepper onto the top. Seeds can be added at this point if you have them.

Bake in the centre of the oven for 30 minutes.

This soda bread is best served fresh from the oven. Enjoy with some nice butter, cheese and a lovely soup – such as this rather yummy one!

It’s time to use up the rest of the carrots before my next shop, so it’s soup time again! This particular pot of soup fed me for two meals. 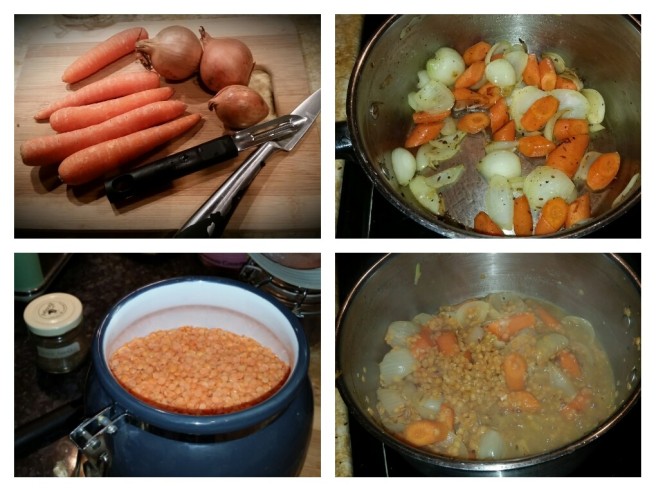 Peel and chop the onions and carrots and cook in some olive oil (just enough so that they don’t stick) along with the spices for about 5 minutes, keeping an eye on it and stirring occasionally.

Add the cider and cook on a medium heat for another 5 minutes.

Add the lentils and stock and simmer on a low heat for 10-15 minutes, adding more liquid if required.

Transfer to a blender and whizz until smooth, adding almond milk until the soup is nearly the right consistency. Pour the soup back into the pan, using some more of the almond milk to swill out the rest of the soup from the blender so you don’t waste any.

Bring the soup slowly up to temperature. Taste. Season with salt and pepper and serve. 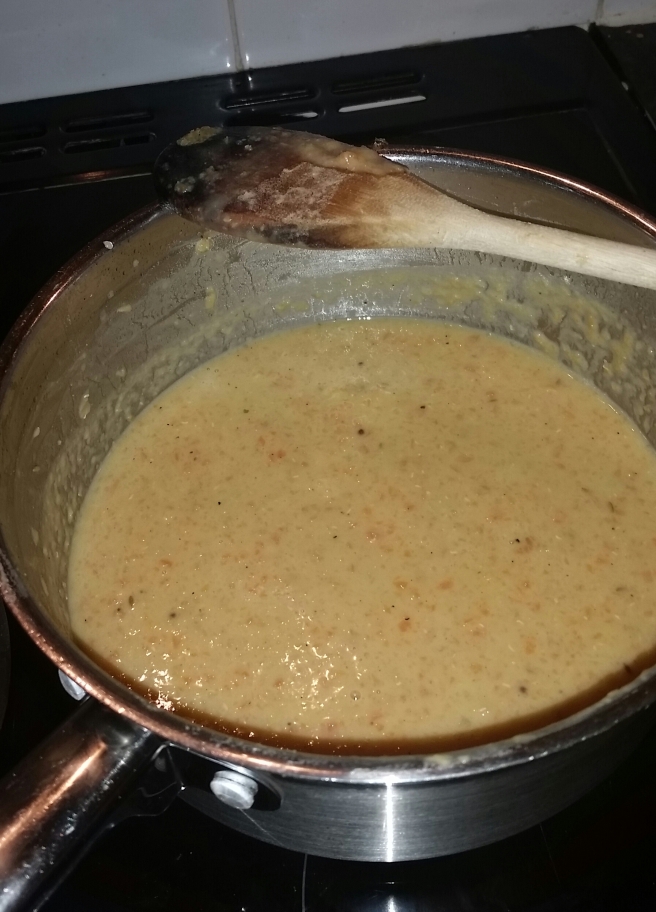