I must say that I am enjoying Simple September so far. Receiving lots of courgettes, runner beans and apples from my parent’s garden has helped; although it does take rather a lot of imagination not to quickly get bored of courgette!

Some of you will know that I use the same basic sponge recipe for many of the cakes I make – Delia’s ‘all-in-one-sponge’ recipe. I find it incredibly versatile; sometimes I add lemon zest and then add a lemon-drizzle topping, other times I add chocolate followed by coffee icing… the possibilities are endless. Yum.

Quarter the apples, remove the core and then cut into thin slices. Place the apple slices in the base of a round cake tin lined with greaseproof paper and sprinkle them with demerara sugar. You could also add a little sprinkle of mixed spice at this stage if you so wish.

Put the remaining ingredients into a bowl and combine well with an electric whisk. Cover the apples with the mixture and bake in the centre of the oven for approximately 25 minutes. You will recognise when it is cooked because the mixture will have shrunk away from the edges of the cake tin.

Turn the cake onto a cooling rack. When cold put the cake upside down onto a plate, so that the apple is at the top.

You may have gathered from the previous couple of posts that I have quite a lot of courgette and marrow to get through! I rather like having a glut of a fruit or vegetable because it tends to lead to the invention or discovery of new and exciting recipes.

I found this recipe in one of my mother’s 1970’s cookery books. I was a little sceptical but thought I would give it a go – it’s delicious, my new favourite thing! The cooked marrow and egg makes a kind of egg custard, and the nutmeg gave it a wonderfully autumnal feel which reminded me a little of American pumpkin pie (although friends who tried it thought it was apple!). I have made it a couple of times now and intend to make it a few more times as I try to get to the bottom of the pile of courgettes and marrows.

I find that older recipes tend to assume that you know what you are doing, so I add the following clarifications:

Ahh marrows – if you have one you have a hundred! I have inherited my mother’s glut of courgettes and marrows because she is away on holiday (not that she would have had a hope of getting through them anyway) so I have been putting them in everything. Some I have ‘hidden’ – grated into curry sauce, thinly layered in lasagne, used to make an egg custard (no, really!). Others I have fried in butter and garlic as a delicious side dish, sometimes with added leeks or mushrooms. This one I stuffed.

Am I bored of courgettes and marrows yet? Certainly not! 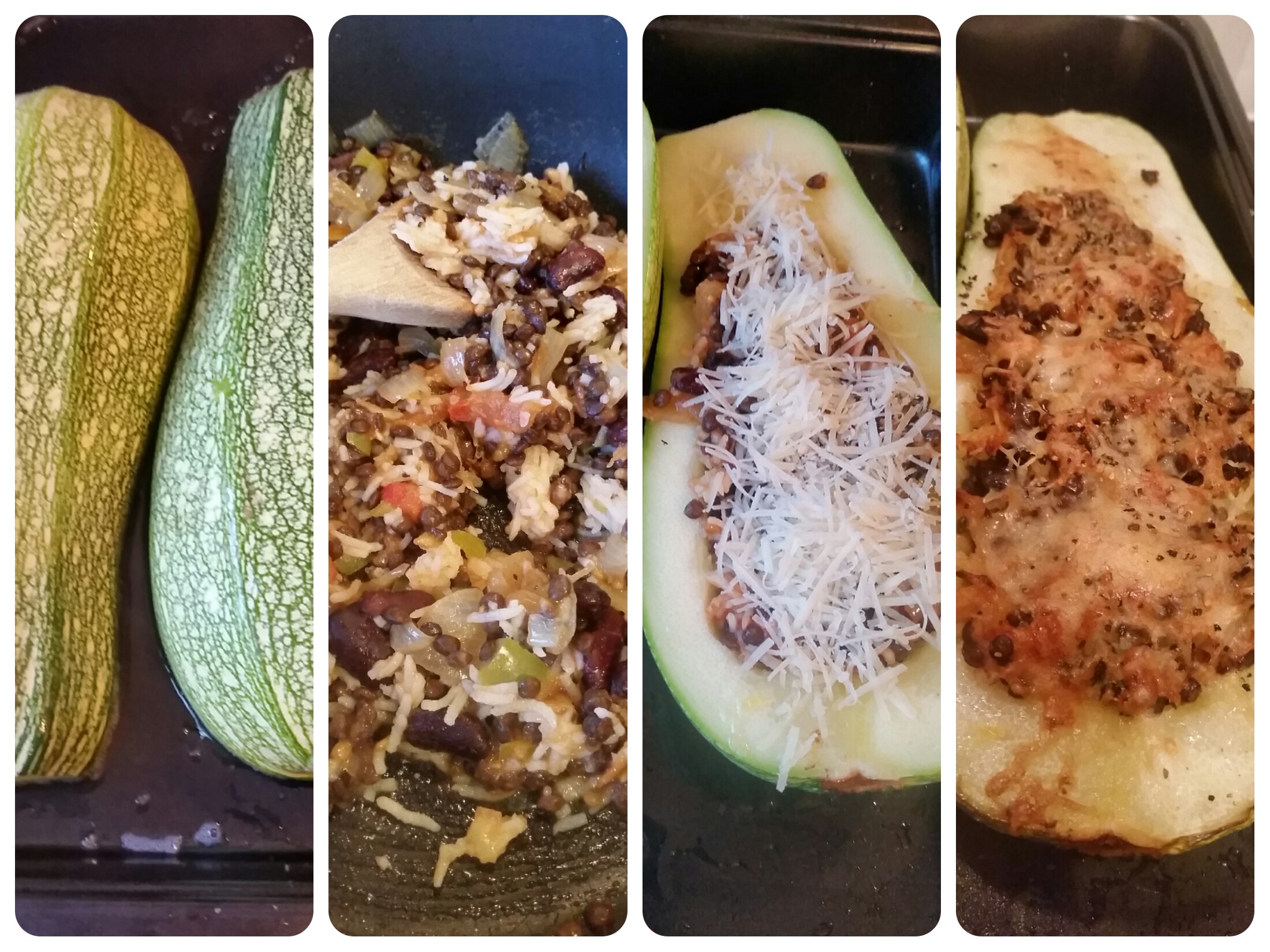 There are many variations on stuffed marrow; I remember my mum stuffing them with minced beef when I was younger which was rather nice. This particular version was vegetarian, and included some good using up of leftovers as well eating into the glut of marrows.

I had cooked far too much rice to go with a curry I had made the previous day (the curry of course had grated courgette in it…), and also had a part pack of cooked lentils and kidney beans in the fridge from a previous meal. I added this to fried onion, garlic,  fresh chillies and a couple of tomatoes to make the filling.

While the filling was cooking I cut a marrow in half longways (one marrow is more than enough for two people), scooped out the middle, and then put them skin-side-up on a lightly oiled baking tray. I then put them in the oven (preheated to about 180oC) for 10 to 15 minutes. When I had tasted and seasoned the filling I took the marrow out of the oven, turned them over, filled them and then covered with grated cheese. Another 20 minutes or so in the oven and they were done.

A sad thing about moving house at this time of year is that I didn’t get to harvest the vegetables which I had lovingly grown. Thankfully my mum came to visit last week bearing gifts from her own garden. This picture was taken about a week ago and I have just polished off the runner beans, and only have a few  apples and over-sized courgettes (zucchini) left.

So how have I used this great abundance?

The courgettes I have of course stuffed – I will share this with you later in the week. I have also fried them in butter and garlic as a side-dish and ‘hidden’ them in other dishes, some sweet and some savoury.

The apples are delicious eaters and I have been munching on them as they are, as well as making rather wonderful cake with them.

The new potatoes were mostly a lovely variety called Pink Fur Apple; they are delicious just boiled and then smothered in butter and pepper, although I also had a go at roasting them.

… and of course everything has been served with runner beans (apart from the cake).

I still miss my garden. 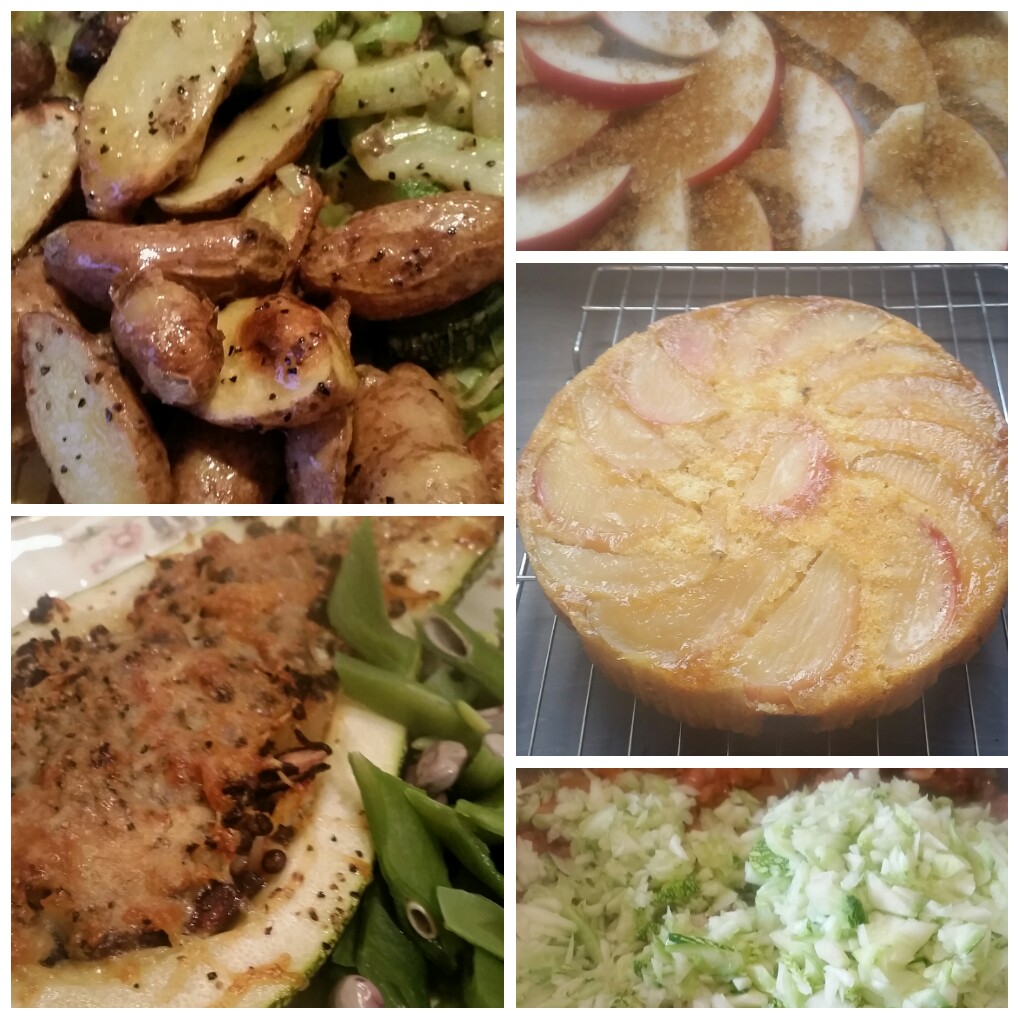 Following a very decadent summer (getting married is a good excuse!) it is time for a ‘Simple September‘.
My husband Steve and I are having a near-complete shopping-ban this month; we are combining two very well stocked kitchens into a much smaller space, plus we have been eating and drinking rather well recently and some simpler fare won’t go amiss.   The exceptions to the shopping ban will be some seasonal vegetables, onions, garlic, eggs, milk… and the occasional treat of nice cheese or meat from the reduced section of the supermarket.
As well as saving money and kitchen space, I’m hoping that Simple September will kick-start my recipe writing again after a five month hiatus (I’ve been a little distracted!).

As a reward for getting the kitchen in our new house tidy, I decided to start Simple September with a (reasonably) healthy treat; coconut and apricot flapjack. All of the flapjack I make is based around the same basic recipe which I have shared with you previously. This time, I decided to have a go at using coconut oil; I substituted it for half of the butter because I wasn’t sure how it was going to behave. I’m glad that I didn’t make the switch to coconut oil in one go because it made the mixture rather more liquid; I recovered the situation by taking it out of the oven part way through cooking and covering it with a layer of drinking chocolate followed by desiccated coconut.

A delicious mistake which I fully intend to make again!! 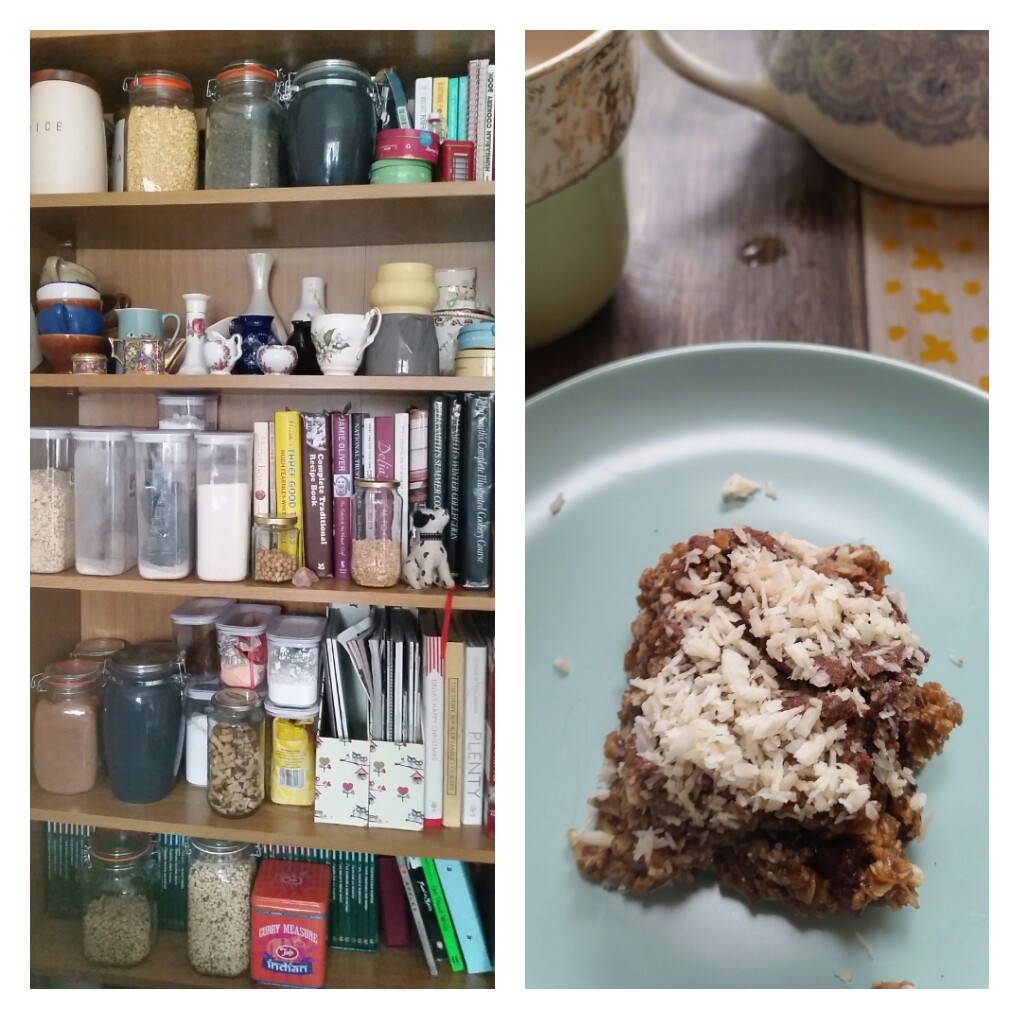